Government dictated education has long been used as a tool to indoctrinate youth to the “correct” thinking, so as to effectively control them when they are adults.  Daniel Hannan, MEP, has uncovered a letter from a U.K. school that declares that attendance to a multi-cultural (AKA multi-culti) “workshop” that is designed to have the child “explore other religions.” 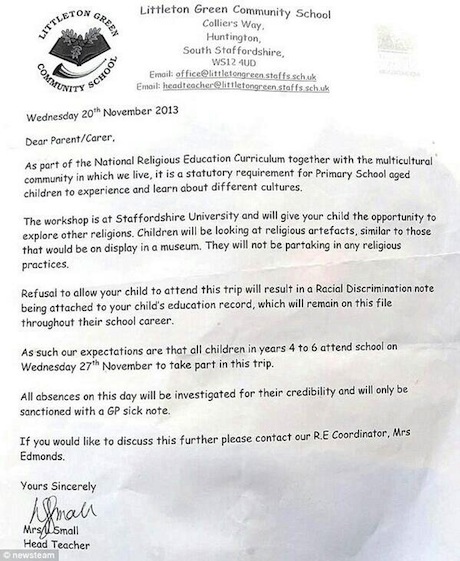 What makes this letter so troubling is that children are threatened with having a “Racial Discrimination note” added to their permanent file to haunt them for the rest of their school career, which will enable discrimination against them:

“Refusal will result in a Racial Discrimination note being attached to your child’s educational record, which will remain on this file throughout their school career.”

Aside from the obviousness that “other religions” means any religion not associated with the established Church of England (or any other Christian denomination), this letter also conflates race and religion.  White people can be Muslim or Buddhist, for example, just as Arabs can be Christian.  But it is far easier to cry “racism.”

As a commentator at Hannan’s blog noted:

“Why the fuss ? ‘Forcibly enriched by vibrant diversity on threat of ostracism from polite society’ could well be the tagline of the last decade.”

The only thing we can do is stand up against these Politically Correct bullies, and tell them to sod off!

This entry was posted in Education, Progressives and tagged Europe, Leviathan, Social Justice. Bookmark the permalink.