Will Anti-Discrimination Laws Be Applied Evenhandedly?

“At least Oregon is applying its anti-discrimination laws evenhandedly. Interesting story out of Gresham: The Oregonian is reporting that Bruce Bottoms – a homosexual baker and owner of ‘Cakes By Cupcakes’ – has been charged with anti-Christian discrimination by the Oregon Ministry of Human Rights (OMHR). Mr. Bottoms and his partner, Lance Limpkowski, recently declined to bake a cake for the notoriously anti-‘gay’ Westboro Baptist Church (WBC). As a result, they’ve been forced to shut down their business.

“It seems that, in another tired attempt to be provocative, representatives from the attention-starved WBC demanded that Bottoms and Limpkowski bake a cake for a Westboro fundraiser with the group’s trademark slogan, ‘God Hates Fags,’ emblazed in rainbow frosting across the top. Mr. Bottoms, who reportedly moonlights as a part-time blogger for the homosexual activist “Human Rights Campaign,” was understandably appalled. He refused.”

And, from an article entitled “KKK wins lawsuit against bakery for discrimination“:

“A Georgia court has ruled in favor of Marshall Saxby, the Grand Wizard of a local KKK chapter, in a lawsuit stemming from two years ago when a local bakery denied him service.

“The three judge panel concluded unanimously that the bakery had violated civil rights laws by discriminating against Saxby when they refused to sell him a cake for his organization’s annual birthday party.”

Obviously these are parodies.  And sadly, an incredibly unrealistic one.  In reality, such a hypothetical business would be allowed to turn-down the business because what just law would force anyone, as a condition of working, to support or advocate a message they found morally repugnant — unless that message was the morally correct one as decided by the hyper-P.C. Left and their bureaucratic minions.

This just underscores that “anti-discrimination” laws are themselves discriminatory and “tolerance” activists are the paragon of intolerance. 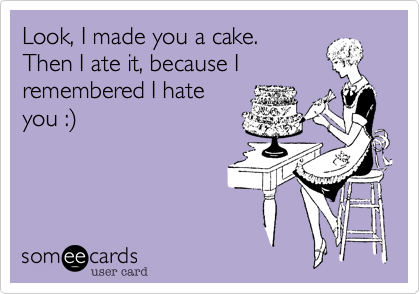 This entry was posted in Progressives and tagged FAIL, Leviathan, Social Justice. Bookmark the permalink.