The Progressive left loves to crouch their terminology in Marxist terms, of a parasitic class with their Bourgeois running-dogs who exploits the Proletarian.  Hence, the existence of the Occupy movement who shriek that they are the “99%” and condeming the “1%” despite the fact that they comprise heavily of criminal elements and spoiled rich kids who want to play revolutionary, and are backed by rich and powerful interests.  How is that square circled?  Simply, those old school Marxist classifications are not the true classes that are being created.

As has been mentioned before, the Progressives increasingly see themselves as an elite who will live in luxury and earn the social right, by providing for the hoi polloi who are dependant on the elite for welfare/largess.  In effect, it is a New Feudalism where allegedly meritocratic overlords provide and guide the tabula rasa masses, while in return getting the acquiescence and the vote of the hoi polloi in some type of democratic validation.  The life of this dependant class is, in effect, the “Life of Julia.” 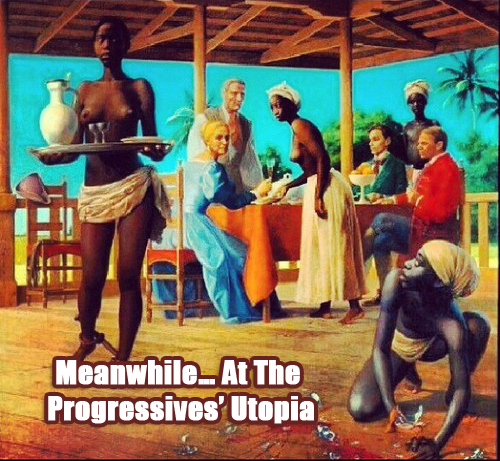 Pictured: The Vanguard of the Progressive Movement "Gets Real" with the Poor Unfortunates…

“There really is a class war in America today, but it’s not between any of these Marxist bumper cars.  The three real classes are the Ruling Class, the Dependency Class, and Everyone Else.

“The Dependency Class is by no means filled with poor people.  Far from it.  And the Ruling Class is not at all limited to elected officials.  Lots of people are becoming dependent upon government power and money.  Many of them are extremely wealthy.  The Ruling Class depends on them for its power.  Everything the Ruling Class does is designed to protect its own interests, and keep its favorite dependent constituents happy.  Other priorities are secondary, if they count for anything at all.

The Ruling Class, which includes much of organized media, spends a great deal of effort convincing Everyone Else to accept the situation.  Our expectations have been lowered to an absolutely dizzying degree.  Years of stagnant growth and high unemployment?  That’s just the New Normal.  Billions of dollars vanishing into black holes of fraud and abuse?  No big deal.  A billion-dollar program that can account for 85 percent of its funding is a smashing success.”

Ultimately, what Occupy and the destructive aims of the Progressive movement are about is the destruction of the “Everyone Else,” that is, those who refuse to accept the New Feudalism being forced upon them, and being punished for daring to stand on their own two feet and embodying the Middle Class work ethic and values.

Dependency is not just about being financially reliant on the state and the elites, but being culturally and spiritually dependant on them as well.  It becomes the role of the elite to provide cultural and spiritual succor to the point where dissent is seen as morally repugnant.

“Many people who are unhappy with the Ruling Class are about to swallow their objections, because they have been drafted into the Dependency Class.

“This isn’t all just about money, though.  Money is vitally important.  In a political and cultural context, those who tell you money isn’t important secretly think it’s even more important than you do.  But this is also about cultural attitudes and communication.  It’s about changing the way we think about ourselves.  Earlier, stronger American generations would not put up with any of this nonsense.  They’d end the true class war in a rout.  Their strength was bled away through a long, steady process of attitude adjustment.  They were taught to accept the demands of the State, without expecting results.  They were taught to accept boundless mission creep, instead of requiring exit strategies from every social-issue ‘war’ the State declares.

“Crucially, our grandparents were taught to reject the notions of charity, responsibility, and independence.  Dependency lost its stigma, to be replaced by talk of entitlement.  Everyone the Ruling Class likes is entitled to the fruits of redistribution, but absolutely no one is entitled to ownership of their own property and labor.  Entitlement is an eternal claim with no beginning and no end.  Denying someone an entitlement is tantamount to theft.  But you’re not allowed to ask if the process of seizing money to fund those entitlements should be viewed as theft… not even when it literally involves robbing the cradle, and dropping insane levels of debt on every newborn child.”

Of course, this can only last as long as the Progressive utopia lasts.