Who are the “Occupy” Movement?

An interesting analysis on just who makes up “Occupy Wall Street,” as well as the other assorted “Occupy” groups, and what motivated them, has been released by the Frontier Lab.  Unsurprisingly, they found that the purported “non-hierarchical collective” was anything but.  Occupy Wall Street could be broken down into two groups: “Communitarians” who just want to find a place to belong, and “Professionals” who consider themselves the “vanguard” and make up the various “Spokes Councils.” 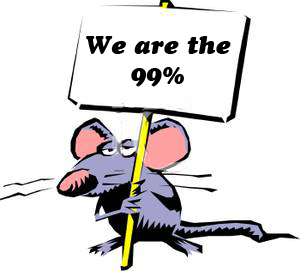 The “Communitarians” are made up of people who are unsure of themselves and of the future, and desire to be part of something and be given meaning and purpose in their own lives:

“Communitarians found substantial personal reward in attaching deep ethical, almost religious-like meaning to their presence at Occupy and to their role in achieving “social justice.” In other words, while “social justice” is the attribute of their presence at Occupy, it was not the ends, but rather a means to an inflated sense of self and purpose in their own lives. Their concerns were based on their own individual needs, interests, and fears—not for the needs, interests, and fears of a larger community or future generation.

“A Communitarian remarked that, upon waking each morning in the Tent City, he was struck by an overwhelming feeling of being part of a family. When queried about their formal religiosity, this segment indicated that they had grown up in largely non-religious households. One interview subject indicated that while he had grown up in a religious family, he had felt estranged due to his sexual orientation.

“The Communitarians may have expressed their satisfaction at being “proactive” to correct injustices, but the value behind this satisfaction is “Security.” Security to Communitarians means reasserting some control over their futures. The rocky job market and economic outlook mean that they feel more adrift and unsure of their life plans, but for them the Occupy protests serve to translate malaise and fear into action, with a result that is both calming and empowering.”

The slow decay of the family and many communities have left people without an anchor in the sea of life.  Government, unsurprisingly has turned out to be a poor substitute.  Thus, many young people turned to the Occupy movement.

A need to belong, and finding that in a collectivist groups is not new.  From the anarchists, socialists, and communists of Revolutionary Russia, and the Hosrt Wessel street fighting sense of unity of the NAZIs in Germany, to the modern day existence of street gangs, the breakdown of a cohesive society breeds youth who feel they have no other place to go results in a susceptibility towards any movement that offers a sense of belonging and the spiritual security that a community provides.

The so-called vanguard, on the other hand, are the “Professionals” who seek control over others (for the others good, they would assure us), as well as “prestige” and “validation.”

“The individuals that make up this segment are interacting with the protests from a semi-professional standpoint: Many claim community action as their career and have been involved with various protests throughout their lifetimes. For them, the Occupy Protests represent a crowning achievement, where theory and strategy have been merged successfully. They feel validated by the fame and attention that come with the large numbers of sustained attendees at the protests.

“This segment seeks the success and implementation of systemic changes because they afford Professionals greater “Control” over their lives and the fulfillment of their two other deep values, “Prestige” and “Validation.” While Professionals are motivated differently from Communitarians, there is a vital connection between the two: Professionals are using Communitarians to achieve the goals that will satisfy this second group’s deep-value motivations.”

An elite that wishes to achieve their own ends by satisfying the void felt by the masses is typical throughout history, and rarely a sign of anything good.

More important, though, than that which divides the vanguard from the useful masses is what brings them together:

“Despite strong differences between the Communitarians’ and the Professionals’ motivations, their deep values do overlap in a crucial aspect. Both segments’ sets of values center around transferring power from the individual to the community. At the same time, their values focus on their own individual fears and desires, rather than on those of others.

“Together, the two Occupier segments have succeeded in presenting a unified face to the public by appropriating traditional terms for American values, such as “freedom” and “responsibility,” and subtly redefining them to create a radical revolutionary plan that seeks to destroy those same values.”

This stands in stark contrast with the Tea Party:

“The Tea Party, conversely, appears to derive its enthusiasm from a sense of responsibility to others and is primarily working for the children and grandchildren of those involved. In the main, its members are not veterans of political protest, nor do they need to be involved to satisfy their souls. Tea partiers seem concerned with preventing fundamental change to the United States in order to bequeath to others a nation they love, not to gain for themselves.”

In order to combat the danger to America that Occupy is a symptomatic of, we must look beyond the superficial and understand what truly motivates so many to stand in opposition to that rare essence that is America.

This entry was posted in Progressives and tagged Occupy, Social Justice. Bookmark the permalink.

One Response to Who are the “Occupy” Movement?