In the age of #MeToo and fears of The Patriarchy™, one would expect a male P.E. coach to be fired for watching a 12 or 13 year old female student strip naked and shower, especially with dozens of young males present in a locker room together. However, one would be wrong when said female identifies as a “boy”, and the woke new rules requires that not only the underage boys who are of the age when puberty hits and they may be uneasy with their own bodies’ transformations, but that an adult male coach supervise and keep watch over a naked middle school girl. Refusing, then to “knowingly place himself in a position to observe a minor female in the nude or otherwise in a state of undress”, means being punished for not “doing [his] job in the locker room”.

“A Florida school district allowed a self-described transgender female student regular access to the boys’ locker room, with no advance warning to the boys or their parents. The first time she walked in, she caught ‘boys (literally) with their pants down, causing them embarrassment and concern by the fact that they had been observed changing by an obvious girl,’ says a complaint letter to Pasco County School District from Liberty Counsel, a pro-bono constitutional law firm.

“With a ‘gag order,’ school administrators forbade teachers from talking about the change, and ordered a male P.E. teacher to supervise the potentially undressed girl in the Chasco Middle School locker room, the letter says. When he refused to ‘knowingly place himself in a position to observe a minor female in the nude or otherwise in a state of undress,’ administrators told him ‘he will be transferred to another school as discipline for “not doing your job in the locker room.”‘

“In an email, an administrator initially threatened to put the male coach on administrative leave, telling him that refusing to supervise a potentially naked female student would ‘not be tolerated,’ said Liberty Counsel attorney Richard Mast. The school’s other P.E. teacher, who is female, also objected and was ignored.” 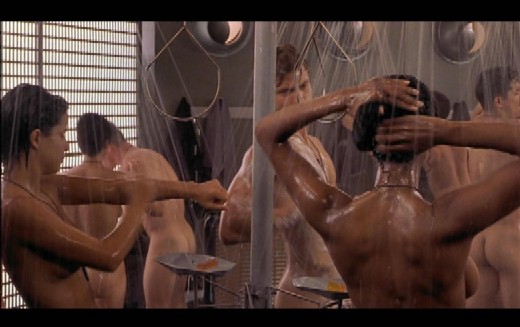 If it is not only acceptable, but also mandatory, to have pubescent youth of both sexes shower together, then why even bother having separate facilities? Why is it so important to segregate those who “identify” as a “boy” and those who “identify” as a “girl”? Upon what rational basis can one argue for “separate but equal” facilities based on “gender identity” but not one’s biological sex? To answer this, one would need an objective definition of “boy” and “girl”; that there is none raises the question of how a subjective personal identity can justify putting one group together while segregating them from the other group? The answer is obvious: To delegitimize that there are physical and actual physiological differences between the sexes by appropriating the appellations of the sexes and applying them to “social constructs” with no basis in objective reality.

For those who don’t think that this isn’t about pushing an agenda that is kept from parents, let’s meet the schools psychologist/LGBTQ&c. advocate:

“Jackie Jackson-Dean, a school psychologist, credits herself as lead author of a ‘Gender Support Plan’ (Plan) and ‘Best Practices Guide’ (Guide) adopted without school board approval. Page two of the Guide credits her as ‘lead content developer.’ The documents encourage improper locker and bathroom access, the use of false gender pronouns, and withholding of information from parents. The unauthorized Plan imposes one person’s beliefs about gender over the beliefs of teachers, other students, and parents. The Plan and Guide require teachers to refer to some children by false gender pronouns, rather than pronouns consistent with biological gender, and to promote false ideas about gender to other children.

“The school psychologist also abused her position as the Gay Straight Alliance (GSA) club advisor, in directing students from Pasco GSA clubs to non-district, outside ‘resources’ and ‘support groups’ like METRO. Without parental permission, METRO is providing contraception, HIV/AIDs ‘PrEP’ drugs, and sexual activity counseling to children, and encourages them toward homosexual behavior. METRO also arranges meetings for ‘youth’ ages 13-22 years old, again without parental permission. Despite having no policy of written parent permission for these referrals, Pasco has failed to subject all METRO personnel or affiliates having contact with Pasco children to background checks.”

The youth are in the best of hands, amirite?

This entry was posted in Education, Progressives and tagged Gender, Leviathan, Social Justice. Bookmark the permalink.