In order to facilitate companies that slaughter endangered birds with “eagle blenders” (and also dabble in “green energy”), the Obama administration is allowing even more endangered birds to be wantonly slaughtered:

“The Obama administration is revising a federal rule that allows wind-energy companies to operate high-speed turbines for up to 30 years, even if means killing or injuring thousands of federally protected bald and golden eagles.

“Under the plan announced Wednesday, companies could kill or injure up to 4,200 bald eagles a year without penalty — nearly four times the current limit. Golden eagles could only be killed if companies take steps to minimize the losses, for instance, by retrofitting power poles to reduce the risk of electrocution.” 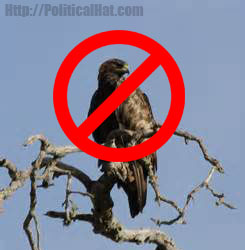 While you would be prosecuted with severe penalties for harming one bird, these “green” elitists are more equal than you and actually receive the government’s blessing to slaughter thousands.

Yet again we see how “environmentalism” invariable means funneling massive amounts of money, as well as special legal status, even if it means killing endangered species… or allowing millions to die of disease.

This entry was posted in Science and tagged FAIL, Green, Obama. Bookmark the permalink.